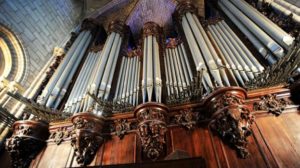 After the fire that ripped through the roof of Notre Dame, many musicians were nervously awaiting news regarding the state of the 8,000-pipe organ.

Pascal Quoirin, who restored the famous organ in 2017, announced that there was no damage to the instrument. He spent two hours examining the electronic components and pipes, and could see no effects of the fire, stating that the temperature inside the organ did not reach above 17°C on the day of the blaze.

Notre-Dame Cathedral has been home to an organ since the 14th century, but has since been subject to many renovations and rebuilds. In 1730 the original organ was replaced (and survived numerous attempts to vandalise it during the French Revolution, the scars of which can still be seen on the organ case.)

In 1963, improviser extraordinaire Pierre Cochereau oversaw a replacement of the console, and further renovations of the instrument followed in 1990, 1992, 2012 and 2014.

One of the cathedral’s three resident organists, Vincent Dubois, said that the organ had been worked on by some of the world’s great builders and said that ‘the synthesis of all that work is just a miracle’.

It is also a miracle that the instrument survived the flames, as well as the enormous volume of water that went into the attempt to save the cathedral. It was thanks to the slanted stone roof above the organ, which created an umbrella over the instrument, that the water from the hoses slid over it.

Impulse-Music have created a website for me which I am really pleased with. Previously I had been included in the websites of my then agents, but now I have been able to include all the information, photos & videos that I want in the way I wish to present them & the finished result has brought forth many complimentary remarks from knowledgeable musicians. After only a week a number of promoters booked me for recitals & I’m sure that this website will enhance my career in a way that I could not have achieved by myself & I have the assurance that it will be maintained by Impulse: musicians who understand what is needed & lovely people to work with.