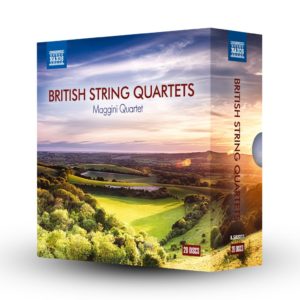 Naxos is releasing a 20-CD Boxed Set of the Maggini’s recordings of British string quartets on 13 September 2019.

From Alwyn and Arnold to Vaughan Williams and Walton, via Bax, Bridge, Britten, Elgar, Ireland and Moeran, to name but a few. This is diverse and wonderful repertoire and remains central to the Quartet’s programming and ongoing commitment to bringing it to new audiences.

These acclaimed CDs have received international awards including Gramophone Chamber Music CD of the Year, Diapason d’Or of the Year, and two Grammy Nominations, and have been frequent Editor’s choices in Gramophone and also BBC Music Magazine.

"I am really delighted that you have found time to refresh my website so quickly. Having been with Impulse since soon after it started, I want to thank you for the concern you always have for my needs, and the prompt and efficient service you offer. I am therefore delighted with the relaunch which brings it again to attention as the best online platform for finding professional musicians. "