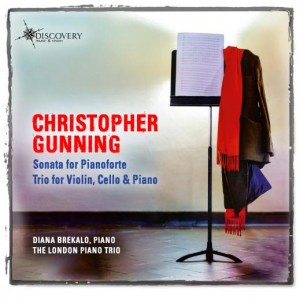 “A new CD has been released on the Discovery label. It is something of a departure for me, in that most of my CDs have been orchestral, whereas this features the fabulous Diana Brekalo playing my Sonata for Pianoforte and the excellent London Piano Trio performing my Piano trio.

I wrote my Sonata especially for Diana after hearing her in concertos with the Royal Philharmonic Orchestra; I wanted to write something which features her extraordinary technique and also her beautifully quiet playing. The Sonata has five movements – the first, third and fifth are dramatic or even forceful, whereas the second and fourth are rather soft and gentle.

My Piano Trio is quite different; the four movements are varied and drawn from personal experiences from my own life. The first movement is subtitled “Au Jardin de Maurice,” which is a reference to Ravel’s garden at Montford l’Aumery. The second is called “Walking with Alan Bush;” it’s fast and the title refers to the composer Alan Bush, who was my very first composition teacher. The third is “Faded Photographs, Poignant Memories,” in which I rake through old family photos, remembering some of the people and events illustrated. The last movement is “A Family Argument” and contrasts jazzy music with something rather Ukrainian.”

“The professionalism and expertise of Impulse music consultants proved invaluable.”