The influential position of Secretary of the Union of Soviet Composers was held by Tikhon Nikolayevich Khrennikov until the collapse of the Soviet Union in 1991 and I met him in Moscow in 1989. 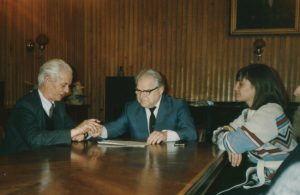 In February 1989, The Composers Guild of Great Britain was invited on a visit to Russia to sign an accord with the Union of Soviet Composers. The picture shows Tikhon Khrennikov passing the pen to Thomas Wilson, having signed first.

I was one of the musicians who travelled with the Composers Guild to perform music of British composers.

Reading “The Noise of Time” reminded me of our visit, just before the fall of the Berlin Wall. Thinking about it sent me in search of the music that we performed and in doing so I came across a diary which I had long since forgotten.

I do remember being met at the airport by our hosts bearing long-stemmed roses for everyone in our group. We were all taken aback by our special reception and reading my diary I realise that I must have been incredibly unaware of the implications of the visit.

Nothing unusual in this, I was generally more focussed on playing the clarinet than anything else. There are however some interesting entries in my diary and specifically one where we were invited to a meal with Khrennikov.

The meal itself was unusual because it is almost the only time in the entire 10 day visit where we were treated to a feast. Here a toast is raised. 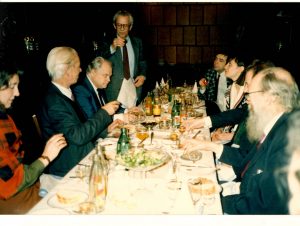 Food in Russia at that time was in short supply, even in the hotels. Roubles held very little purchasing value and most of the time, to be served food at all, you had to barter with Marlborough cigarettes.

Our guide for the tour, and very possibly party member, was Svetlana and she was full of pearls of wisdom.

When I was approached by someone in the street in Leningrad who asked me if I was a capitalist. I asked Svetlana how they knew I was not Russian?

She answered that apart from the fact I was wearing a fox fur hat (apparently greatly sought after in Russia at that time) she told me: “You look like a Capitalist because you look as if you are in possession of your life”!

Struggling with guiding a group of unbiddable musicians through the Russian Capital, I also note in my diary that Svetlana said:

“I’d rather lead 50 Russians than 2 Englishmen – they have no collective spirit”!

Even if we have no collective spirit, we do have artistic and cultural freedom, and music is enjoyed as a creative force and certainly not as a political tool.